Today is my birthday, so I decided to celebrate with some cupcakes. Not that I need to eat anything more, I have lunch and or dinner plans practically every day this week, but still, it's nice to have some cake! I love vegan baking. Not that it is calorie free, but it is definitely less fat and much better for you than the traditional eggs, butter and milk cake. 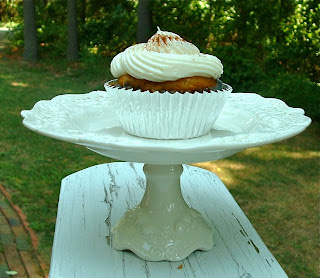 I am sick of chocolate cake so I decided to peruse on of my favorite cookbooks, Vegan Cupcakes Take Over the World. I love this cookbook and know I have talked about it several times on this blog. Every morsel of cake that I have made from this has been devoured by vegetarians and meat eaters alike. Pumpkin Chocolate Chip cupcakes were the final decision. These are so amazingly good, it's not funny. I opted out of the cinnamon glaze that was suggested and went with a cream cheese (which does not make them vegan anymore) frosting with a little kiss of cinnamon on the top. YUMMY!!!
I definitely have an issue with copying a recipe from the cookbook word for word and posting it on my blog. I am sure if you google it, you will find it. But even better go buy the book. You will thank me later!
Posted by Kate at 11:32 AM