Time for a Challenge!!!

I joined another reading challenge!!! Since I failed miserably at the last one..... well, life kind of threw me a curve ball there and the last thing I wanted to be doing was reading some serious literature. The best I could muster was a cheesy romance or two!! Lucky for me, the host of this challenge decided to do another, and this one is only TEN books instead of TWELVE. So totally do-able, don't you think???? So look for the occasional book review starting in August!! 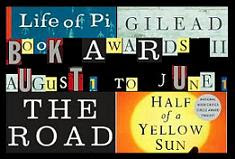 1. Voices from the Other World - Naguib Mahfouz 1988 Nobel Prize
2. Vernon God Little - DBC Pierre 2003 Man Booker Prize
3. Love in the Time of Cholera - Gabriel Marquez 1982 Nobel Prize
4. Vera - Stacy Schiff 2000 Pulitzer Prize (Biography)
I love the fact that you can change your titles at any given time, so who knows what else I will read!!!
Posted by Kate at 8:00 AM

Good list! I read The Sparrow years ago and recently finished Life of Pi. Happy reading.