A Tale of Moo

Sorry for the lack of posting this week. I have really made a big effort to post at least three times a week, but this week, that pesky little thing called life got in the way. One of my closest friend's husband's had some surgery so I wanted to be there with her for that, and then it seems a "stomach bug" bit me. At first I was blaming the pollen, but let's face facts, pollen usually does not make you nauseous. Ok, I will stop there, you get the idea.

So, my knitting has taken a turn for the worst. I was hoping to show you a lovely knitted cowl (Did you know cowls are the new scarf for this coming Fall/Winter???) but apparently, I cannot count to eight and have started the %^&*$ thing FOUR times. And it's on tiny needles with thin yarn. There was lots of expletives flying about, let me tell you.

Until next week, I will leave you with a picture. There is a farm near my house. I pass by at least twice a week and say to myself, "Gee I wish I had brought my camera". So the other day I left my cheapo travel camera in the car (and then I thought I wish I had brought the good, big expensive one for better quality) I don't know what it is about these guys, but I think they are just so beautiful in the field, grazing, or sitting as it was about to rain. I quickly snapped this from the car, next time, I will regale you with more cow pictures!!!! 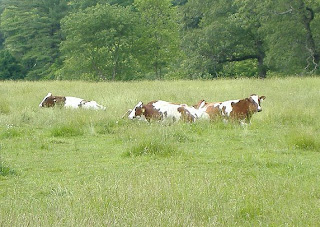