Sorry there was no post yesterday! It had nothing to do with Friday the 13th, believe me. Actually, I sat down quite a few times to type, and while I had stuff to talk about, it just didn't translate from the brain to the keyboard so to speak. So here is the latest.....

Thursday night we went into the MFA Boston (that's Museum of Fine Arts) to see the Edward Hopper exhibit. (I added some links in case you are not "into" art!!) We left early, very early in fact because there was also a Red Sox game (rolls eyes) and they are both in the same area. It's a good thing too, because the traffic was B-A-D. Lately, I have not cared for their special exhibits. Eh. Nothing that interesting, but when I saw a Hopper exhibit my little eyes lit up, but I was not holding out hope. I was wrong. It was one of the BEST they have had there in a LONG time! All the famous works, and since he worked in Gloucester (MA, not the UK) and the Cape (Cape Cod to y'all) there were TWO rooms devoted to this. And you know how I LOVE lighthouse pictures! I was a happy camper. I left with a new print to frame for the new house, and of course the exhibition book. (Like I need MORE books to move, right???) 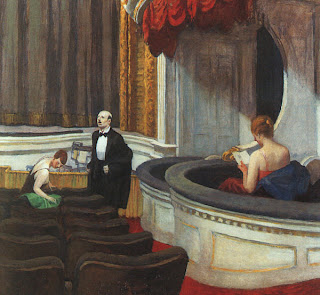 My New Print
Two On The Aisle
Edward Hopper 1927

So today I did a scouting trip to IKEA. One opened over a year ago, but I never went. My friend RAVES about it. I dragged Mark along, just to torture him (oops I mean give input into choices!). WOW!! I am in LOVE!!!The last time I saw a parking lot that big was in Disney World!! The store is even bigger. We had lunch in the cafeteria (yummy!!) and I even bought a Swedish dessert (ligonberry) for tonight in the food section! And that's all I bought! After all, this was a "scouting mission" with no real purchases to be made until after the move. Really, why buy it now, lug it into the basement only to have to move it in a month. I picked out some nice stuff for the sun room, which is the ONLY room in the new place I have no furniture for. I'm going with a "beachy" Nantucket theme, and this is the chair I picked out...... 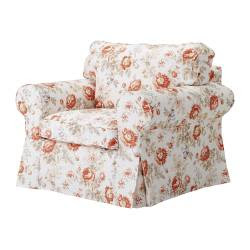 Perfect for reading or knitting don't you think???

Ok, I better stop typing and go scrounge up something for dinner. Maybe I'll just have dessert!!!
Posted by Kate at 3:56 PM

love the chair. I love IKEA as well. We have one here I think it has been open about 2 years and I have been a total of 3 times. It is just way overwhelming. You have to do scouting missions.