Yesterday, we had a visitor. I was in the studio, working on an order when I heard lots of noise on on my back deck. Figuring it is the neighborhood kids, or the wind blowing things around, I ignored it. So did the dogs, for the most part. When I went into the kitchen, I felt two beady little eyes staring at me through the door. Apparently a squirrel had "discovered" my bird feeders on the deck filled to the brim with yummy sunflower seeds. The temptation must have been to much for the little guy because he was trying to scale the glass sliding door.

Lucy caught sight of him and the war was on. Squirrels are Lucy's arch rivals. She hates them. The mere mention of the word squirrel sends her into a fit of barking and going to each window in the house, patrolling the perimeter. Well, the squirrel was either stupid or very smart, knowing the glass was between them, because it was not bothered at all by the loud barking and growling. They were nose to nose at the door, and neither one was going to move. 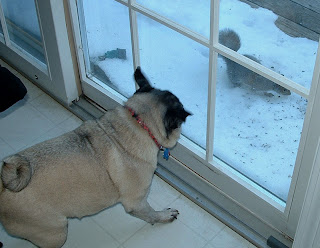 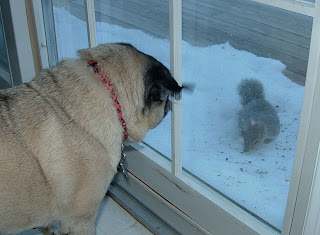